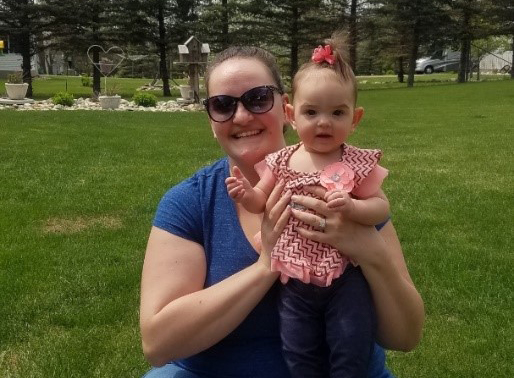 When Angela Retzer accepted her new role at Blue she had a very important factor in mind—family. Angela and her husband were planning to have children and accepting a job with an employer who valued their employees’ families was at the top of her list. “After learning more about the maternity leave and other benefits I was sold,” Angela says. “BCBSND puts your family first and I was very excited to hear that.”

When Angela found out she was pregnant her excitement was elevated by the support she felt from her team. Her supervisor was understanding and flexible with her schedule when she started experiencing morning sickness and her co-workers would constantly check in on how she was doing. This made Angela feel very comfortable at work.

Angela’s supervisor and team took care of everything at the office while she was in the hospital. Angela was touched by the many texts she received checking in on her and congratulating her on welcoming daughter, Amelia, into the world. There was no rush for Angela returning to work after maternity leave. She was able to come back part time, helping her ease back into her role. “My supervisor allowed me to choose how I wanted to come back,” Angela says. “There was no rush to get me back in full time. They really wanted me to pick the pace.”

Angela admits when she first started at Blue, she wasn’t aware of the building amenities offered to moms. She talked with her co-workers and supervisor to get more information on what’s available in the building. “I work with a lot of other moms and they are very helpful in giving me advice and information.”

Angela was grateful for BCBSND’s convenient and private lactation room. “BCBSND’s lactation room is very comfortable and has everything a mom needs” Angela says. “My team was always supportive and understanding whenever I needed to take a break to pump.”

Since becoming a new mom, Angela has enjoyed the work/life balance BCBSND’s offers its employees. Angela says her team, supervisor and company all support her and her family. “At BCBSND your family is just as important as the work you do here,” Angela says. “If something comes up regarding your family, they want you to take care of them first.” During Angela’s three years at Blue she’s made lasting connections with her co-workers and says, “my family feels like it’s a part of Blue.”

Baby Amelia has even been to the office to meet team Blue “Our visit was so great! My co-workers were leaving meetings early to come meet Amelia. I feel very comfortable bringing her into the office.”