FARGO – After nearly 33 years of service, Tim Huckle announced his plans to retire in January 2020 as President and Chief Executive Officer of Blue Cross Blue Shield of North Dakota (BCBSND).

"We are positioned well to leave the reins to the next, capable set of leaders to continue to move this organization forward, and I've decided now is the right time for me and my family to move on to retirement. Additionally, we have all of 2019 to support a smooth transition," shared Huckle.

In light of Huckle's upcoming retirement, BCBSND's Board went through a diligent review process to select Huckle's successor. Throughout 2018, a comprehensive review was completed to determine if an external search would be conducted. After careful review, the Board determined that a selection would be made within an internal candidate pool.

Board Chair David Sprynczynatyk added, "The Board has great confidence in Dan's ability to lead the organization to the next level of success; his proven ability in problem solving, wealth of knowledge and expertise in our industry's competitive landscape and strength in relationships will serve the organization well."

Conrad is a native North Dakotan, who brings more than 20 years of varied experience to his new role. He joined Blue Cross Blue Shield of North Dakota (BCBSND) in July 2013 after spending time as in-house counsel at two large public companies. Dan also served in the public sector having started his career as a trial attorney with the U.S. Justice Department. During his time with BCBSND, he has progressively taken on more and more operational and executive responsibility, touching most of the enterprise.

"I am sincerely honored to work alongside such dedicated and member-focused individuals every day," Conrad said. "I am humbled and thrilled to have the opportunity to transition into the CEO role and lead our amazing team as we continue our 78-year legacy of providing our members peace of mind and ensuring access to a high-quality care. Finally, I am very thankful for the approach the Board has taken by providing the team a year to work together to ensure a smooth transition that will set the company up for continued success."

Conrad earned his bachelor's degree from Minnesota State University Moorhead and his law degree from the University of North Dakota. He serves on the Board of Directors of Make-A-Wish North Dakota and the BCBSND Caring Foundation. Conrad lives in Fargo with his wife Rachel and their daughter Abby. 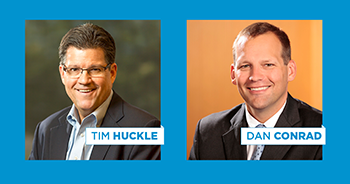